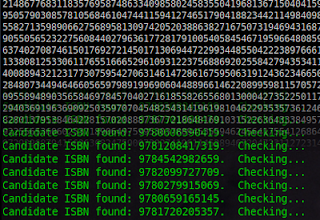 In 2010 I was working in a bookshop and teaching myself the web scripting language PHP. A good way to learn a language is to find problems you can solve with it, and as I had recently been working with ISBNs, the identifying numbers given to printed books, I decided to write a program to search Pi for them.

I found the first three books in Pi. Then, a few years later, it got picked up by a few popular Twitter accounts and went viral, including a write-up in the science page of Der Spiegel.

What’s the point? There isn’t, other than a programming exercise and the pleasure of finding things out. But it does raise a few interesting things:

Normal in this sense means “does it have the same numbers of each digit, 0-9?”
If Pi is normal then you’d expect every possible number sequence to appear in it. If it’s not (say, if you get to a certain point and then there’s never a 9 again) then it won’t. It’s generally thought that Pi is normal, but it’s still an open question in mathematics.

How does it fare with the old 10 digit ISBN?

As you’d expect, there’s about a thousand times more ISBNs if you search for the 10 digit version, as it’s a shorter string and more likely to appear in any random set of digits. Some ISBN-10s end in an X, which obviously doesn’t appear in Pi, but that can be ignored, we’re just messing about here. David J Fianders went to the effort of tracking down ISBN-10s.

It’s now out of date!

ISBNs are constantly being added for new publications, so it may well be that “my” first three books have been superseded. Feel free to try searching for new ones!